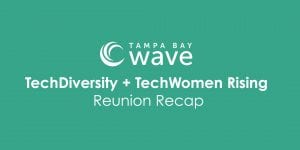 Wave recently hosted a reunion for its TechDiversity & TechWomen rising cohorts. While it was a challenging year for all of us, it was inspiring to see the strides our companies have made, even in the face of global adversity. Here are some current highlights from our alumni:

Dr. Barnes relocated the venture to the Tampa Bay region. In addition to ongoing growth, 20Lighter is also aligned with the MedTech Innovator program – the largest accelerator of medical devices in the world and the medical technology industry’s global showcase and accelerator for innovative medical device, digital health and diagnostic companies.

An impressive year for Allotrope Medical as they cleared FDA regulatory approval, and deployed multiple hospitals, including Cleveland Clinic,  as part of their initial launch. In addition, Albert and team successfully closed a Series A funding round.

CICLA3D continues to successfully scale, and is readying plans to expand to the U.S. market.

GiGi and Fêtefully were accepted into, and have now since graduated from, the prestigious TechStars Austin program. Fêtefully has bolstered its ranks along way, adding multiple members to the team.

Lazarillo was recently to be a part of the first cohort of Newlab’s Accessible Streets Studio, a collaboration between Ford’s Michigan Central and Newlab to develop transformative technologies to make the City of Detroit more navigable for its residents.

NeuroFlow raised a $20M Series B round to expand its technology-enabled behavioral health integration platform, led by Magellan Health. The venture continues to aggressively expand as it bridges the gap between mental and physical health, with the aim to improve outcomes and reduce the cost of care.